The Sunstar Group celebrates the 90th anniversary of its founding in 2022. Sunstar has contributed to improving the health and quality of life of people around the world through various businesses by leveraging its unique founding origins. In Sunstar Group Long-Term Vision 2032, the company sets out the ideal image it intends to realize in 2032, on its 100th anniversary; in order to realize this vision, Sunstar will continue its efforts both to undertake new challenges and to become a valued member of society.

Sunstar traces its origins to «Kaneda Keitei Shokai,» a private wholesaler of bicycle parts established in Osaka in 1932 by founder Kunio Kaneda, who was born in a small village surrounded by sea and mountains in Hiroshima Prefecture. He had his sights set on the bicycle industry, which was rapidly booming as a new industry. The company’s first hit product was rubber glue for fixing punctured tires. Previously, rubber glue had been sold in large cans; Kaneda’s innovation was to package it in small metal tubes for easier use. He then used the same production facilities to create metal tubes filled with toothpaste, his next success. At a time when toothpaste was still predominantly sold in powder form, Kaneda developed and commercialized processing methods for his tubed toothpaste from scratch, and it was praised for its ease of use, its quality, and its’ refreshing flavor. The company rapidly grew its oral care business to include toothbrushes in addition to toothpaste, then expanded into other sectors such as cosmetics and health foods.

In 1979, Sunstar began sending researchers to the University at Buffalo, The State University of New York, which was renowned across the world for its dental research. Over the course of 10 years of joint research into periodontal disease, Sunstar identified cetylpyridinium chloride (CPC) as an antiseptic capable of effectively killing the bacteria responsible for causing periodontal disease; in 1989, it launched its GUM range of products, and became a major player as a total care brand for periodontal disease prevention.
Sunstar transitioned from producing rubber glue to producing adhesives for automotive and construction use, anticipating greater growth in these sectors. In 1967, it entered into a technical partnership with Essex Chemical, a U.S. company with world-leading technologies, and expanded its business significantly on the back of heightened technical prowess. Sunstar has developed diverse adhesives that cater in detail to the requests of Japanese automotive manufacturers, and today sells products to automakers across the globe.
Sunstar also successfully shifted its bicycle parts business to create metal parts for motorcycles, which was believed to have greater potential for growth. Top racing teams now use Sunstar’s race-specific brake discs at motorcycle races around the world; the performance and quality of its discs are well-established, and Sunstar has developed into a leading brand cherished by large numbers of motorbike afficionados. Evidently, through constant innovation, we have expanded our strengths and developed in each of our businesses. 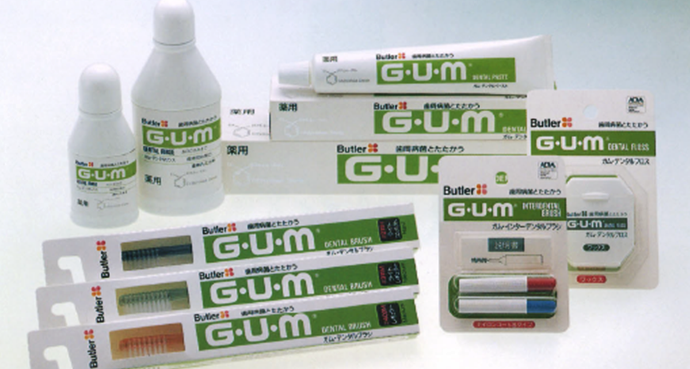 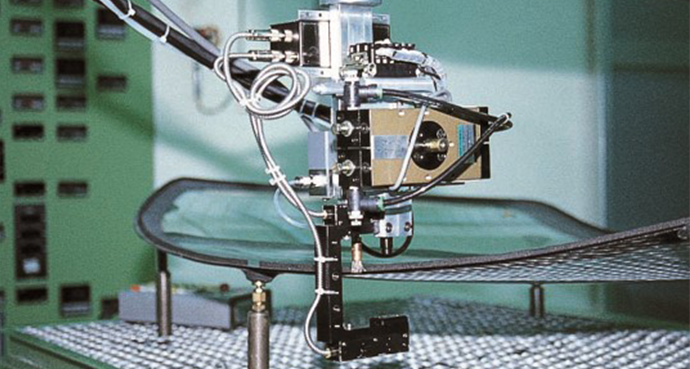 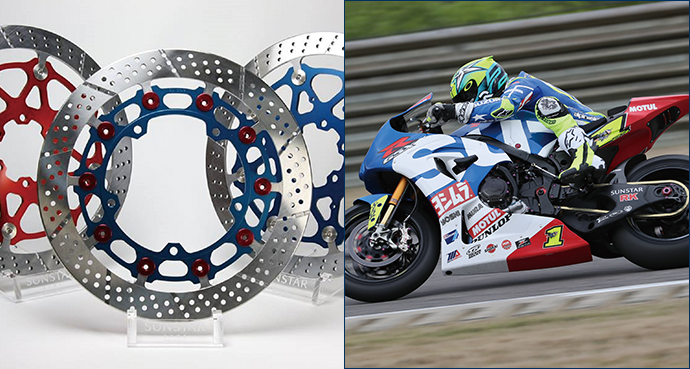 For a company to grow, it is vital that its founder’s DNA is passed on to successive generations. And Sunstar was required to ensure this happened when founder Kunio Kaneda, who had demonstrated unparalleled business sense, passed away at the age of just 50. In 1963, a year after founder’s death, Hiroo Kaneda—then senior managing director and later president—oversaw the creation of the Sunstar’s Corporate Motto, “Always strive to help people everywhere achieve better health and enhance their quality of life,” which would become a source of emotional strength for the company’s employees. The motto incorporates Sunstar’s desire to contribute to society through oral health, physical and mental health, and enabling people to live wholesome lives. We continued to create high guidelines for employees to aim for by establishing basic management principles and a code of conduct for employees, and created an explanatory booklet that translates the code of conduct into nine languages to ensure understanding of the principles among all employees.

Encouraging awareness of the relationship between oral and general health

Based on the above principles, in 1977 Sunstar established the Sunstar Dental Health Promotion Foundation—the predecessor to the present-day Sunstar Foundation—to provide grants for research into dental health, and to educate the public on dental and oral hygiene. After collaborating with various dental health experts, Sunstar became one of the first entities to identify a close relationship between periodontal diseases and systemic disorders such as diabetes. Together with the late Dr. Robert J. Genco, who was then an up-and-coming researcher at The State University of New York and who would go on to become a leading authority on periodontal disease, and with Dr. George L. King at the Harvard-affiliated Joslin Diabetes Center, the world’s largest diabetes research center, Sunstar has hosted symposiums on the subject of periodontal disease and diabetes for medical and dental experts around the world. In addition, the company is supporting the growth of young researchers studying the relationship between oral and general health. In recent years, together with Dr. Katsuya Iijima of the University of Tokyo, a specialist in Gerontology and one of the proponents of oral frailty (the deterioration of mouth function accelerates aging), the Japan Dental Association, and other experts, we have been working quickly to raise awareness of the prevention of oral frailty, in which a frail mouth accelerates the aging process throughout the body. 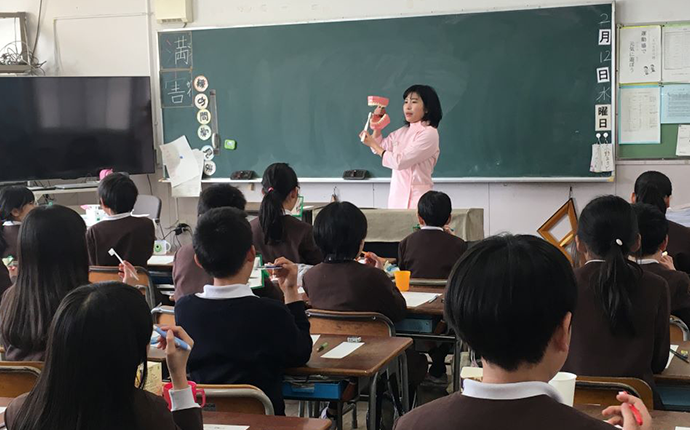 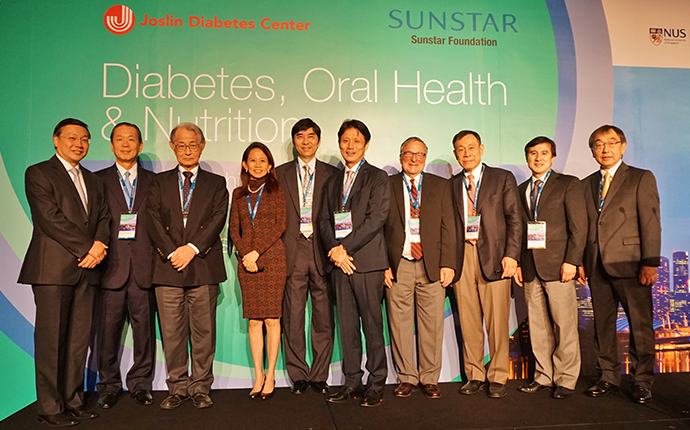 In order to realize its Corporate Motto and provide products and services for health promotion, Sunstar recognized that it ought to first ensure that its own employees were in good health. Accordingly, in 1985 the Sunstar Mind and Body Kenkodojo (health training center) was established to promote healthy lifestyle habits among its employees. Sunstar’s Kenkodojo brand of health foods was inspired by healthy food provided at this center. Indeed, in Japan, Sunstar has been recognized as Certified Health & Productivity Management Outstanding Organization every year since the Ministry of Economy, Trade and Industry launched the recognition program in 2017. In 2019, Sunstar launched its QAIS -air- range of deodorization and sterilization systems in a bid to improve health by effectively sterilizing, deodorizing, and controlling bacteria and viruses present in indoor air environments in Japan.

In 2017, Sunstar Group Representative Yoshihiro Kaneda spearheaded an initiative to draw up more concrete management objectives, as a way of achieving its ultimate goal: the realization of the Corporate Motto. In 2019, Sunstar announced the Sunstar Group Long-Term Vision 2032, a set of goals to be achieved by 2032, on its 100th anniversary. We aim to be a company that contributes to solving social issues through our business as a provider of products and services that support healthy and comfortable living, including the mouth, the body, the air environment surrounding the body, living spaces, and mobile spaces. In addition, we have declared that we will firmly face our social responsibilities, such as environmental issues and improvement of our employees’ well-being.

Turbulent world affairs, climate change, population increases, aging societies, and infectious diseases—various social issues are increasing in complexity and seriousness. For this reason, Sunstar is considering how it can utilize the diverse strengths it has cultivated via its different businesses to identify solutions to such issues and contribute to society; it is also engaged in discussions on how to further evolve its long-term vision, and develop new businesses and services.
If it wishes to deliver wellbeing both to its stakeholders and to the earth, the company recognizes the importance of meeting expectations by engaging in dialogues with people around the world. Sunstar will do everything in its power to make this happen.

Back to Sustainability Top Page