Once every month, we host a webinar part of a series of open conversations with leading experts from the oral care field, dedicated to oral health challenges through different life stages. During the first edition, streamed on March 11, 2021, we discussed the very start of a new life: pregnancy. What are the implications of a bi-directional relationship between pregnancy and oral health, and how can we seize pregnancy as a unique opportunity to achieve long-lasting behavior change? Find out below what the experts, prof. dr. Mia Geisinger and prof. dr. Phoebus Madianos, had to say.

The influence of pregnancy on oral health

Already in the early sixties, it was acknowledged by Silness and Löe that pregnancy could influence oral health, with periodontal health in particular. Professor Geisinger explains: “Even in patients who don’t have an increased dental biofilm mass, there seems to be an increased amount of inflammation. Usually this increases over the course of pregnancy, peaking and then plateauing in the second and third trimester, and usually resolves after partition”. Professor Madianos adds: “Indeed, the increased inflammatory response is mainly driven by elevated levels of hormones in pregnant women.” He continues: “It is important to realize that pregnancy on its own doesn’t necessarily turns gingivitis into periodontitis. However, when women start their pregnancy with periodontitis, this can get worse, exactly because of the exaggerated inflammatory reaction due to sex hormones”.

Although there is quite some variation between studies, the prevalence of pregnancy gingivitis is shown to be high. “The range has been shown to be between 67-100%”, professor Geisinger estimates. “So somewhere in the range of a lot of people who are pregnant” she adds with a quip. This is significantly higher than in the total population.

Periodontal disease and its influence on pregnancy

Pioneering research, performed by Professor Steven Offenbacher at the University of North Carolina at Chapel Hill a few decades ago, demonstrated that the association between pregnancy and periodontal disease was not just one-directional. Professor Madianos: “The clinical studies we performed at Chapel Hill show that fetuses that had an antibody response against periodontal pathogens had a much higher chance of being born prematurely or at low birth weight. This implicates that bacteria can travel from the periodontal pocket and even reach the fetal-placental unit, eliciting local inflammatory reactions or even infecting the fetus directly”. Professor Geisinger further elucidates: “These so-called bacteremias are really proportional to the amount of inflammation, not necessarily to the amount of clinical attachment loss. So potentially, pregnancy could amplify those bacteremias because it potentiates inflammation”. Professor Madianos continues: “Also, in contrary to what was believed before, the placenta is not sterile. In fact, it has its own microbiome, and it is, surprise, surprise, very similar to the oral microbiome”.

Periodontitis can negatively influence pregnancy outcomes. Oral bacteria can travel to the placenta, causing local inflammatory reactions or even infecting the fetus directly.

In terms of epidemiology, again there are conflicting results between studies. There seem to be some predisposing factors that play a role, such as ethnicity and access to care. Professor Geisinger adds: “It’s also important to note that in case-control studies, controls may have a significant amount of inflammation in the form of gingivitis, but still are considered as non-periodontitis”. This could potentially “dilute” the study results.

With the role of inflammation and bacteremia in mind, you might expect that taking away the inflammation by treating periodontal disease might be beneficial for pregnancy outcomes. Professor Madianos: “There have been studies that looked at how periodontal therapy can improve the outcome of pregnancy. Early small-scale studies were promising and clearly showed reductions in adverse pregnancy outcomes. After that, larger studies were not always able to reproduce this, but that could be explained for example by the effectiveness of the actual periodontal treatment. The studies that did show a higher reduction in periodontal inflammation, i.e. a better outcome of the periodontal treatment itself, were better at reducing adverse pregnancy outcomes. Another explanation is the timing of the treatment. Most interventions took place in the second trimester and onwards, which might have been a bit late”. Professor Geisinger on her own personal experience from one of the clinical trial she performed: “reduction of gingival inflammation and alteration of the dysbiotic biofilm is critically important. That involves treatment to an endpoint, timing the treatment appropriately, and making sure that patients really perform self-delivered home-care”.

As mentioned above, pregnant women are more prone to inflammation because of the elevated levels of sex hormones. That raises the question if periodontal treatment can even be effective in terms of oral outcomes. Professor Geisinger reassures: “There has been a paradigm shift. A few decades ago, when a woman got pregnant, she was told by her dentist: see you in 9 months. While we know now that oral care is critically important”. Also, in one of her own clinical trials, periodontal treatment was effective: “We were able to significantly reduce all periodontal parameters: probing depth, gingival index, plaque index, and clinical attachment level, as well as periodontal inflamed surface area score”.

Collaboration between dental professionals and members of the perinatal team

You would expect that with this pile of evidence, women are already receiving optimal oral care during pregnancy. Unfortunately, Professor Geisinger reveals this is not really the case, at least not for the United States: “Data shows that only 60% of women receive preventative dental care during pregnancy. While if they are aware of the importance of oral health, they are 40% more likely to seek dental care.” According to professor Madianos, the situation in Europe is not much better: “Apart from maybe some Scandinavian countries, overall, I don’t think that there is any particular preventative oral care system in place”. So, while the urgency of good oral health is clear, collaboration between the dental and perinatal team can definitely be improved. Professor Geisinger suggests straight-forward action: “When a newly pregnant patient comes in for an appointment at the OB-GYN, nurse practitioner or midwife’s office, they go through a certain screening procedure. One checkbox question should be: when was the last time you were at your dentist office? This could be a critical component to make sure we’re seeing a patient as early as possible in pregnancy”. She continues: “We should make sure that individuals who are planning to become pregnant are also counseled to make sure their oral health is taken care of as well”.

Only 60% of pregnant women receive preventative dental care. Asking about dentist visits should of the standard screening procedure at the perinatal team.

Fortunately, pregnancy is not just a challenging stage in life. In fact, according to Professor Geisinger, health professionals can use it as a unique opportunity: “Positive behavior change during pregnancy is really a critical opportunity, and pregnancy has been identified as a time where women are more likely to make those positive behavioral changes. For example, tobacco cessation rates are two-to-three times higher than in other life stages, and patients who quit during pregnancy are more likely to stay quit. If we can take the time to counsel our patients about the benefit of self-delivered oral hygiene, that could have a life-long effect. They have six to nine months where they know they are pregnant, to make those positive habits stick”.

Pregnancy has been identified as a time where women are more likely to make positive behavioral change, making it a unique opportunity for both mom and child.

“We also know that better maternal oral hygiene has been associated with decreased rates of early childhood caries in their offspring”, she adds. “The impact is really huge when we think of pregnancy as an opportunity for these changes”.

If you are interested in learning more about this topic, you can re-watch the entire webinar here. Our next webinar of the series will tackle caries prevention and management in children: the foundation of long-lasting oral well-being. 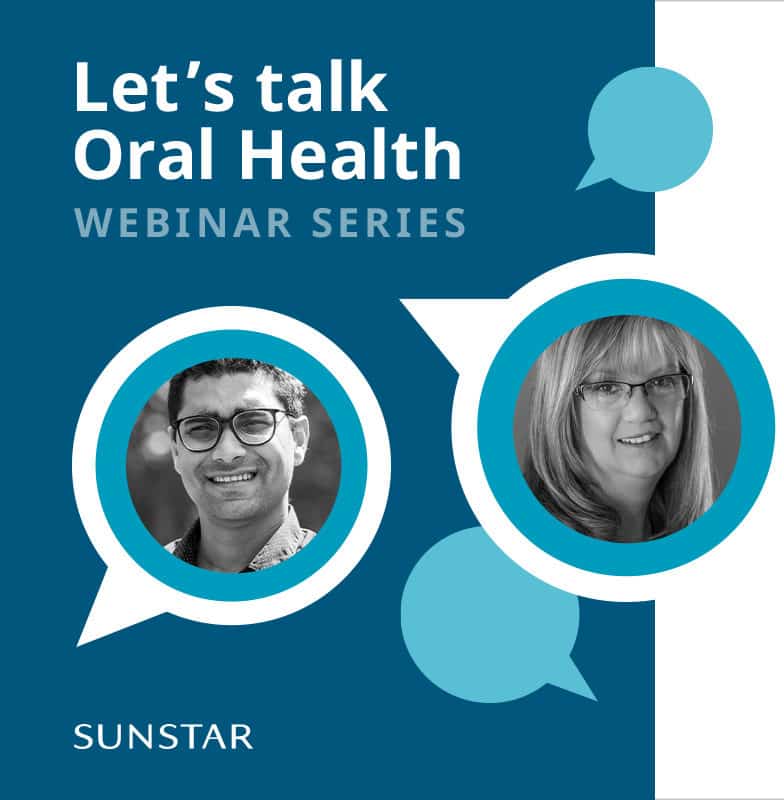